71. The Use of SlNPV as A Biological Agent to Control Cutworm on Soybean

Arifin, M. 1999. The use of SlNPV as a biological agent to control cutworm on soybean. Seminar on Pest Surveillance and Forcasting. Direktorat Bina Perlindungan Tanaman Pangan. Bogor, 31 Januari 1999. 11 p.
Muhammad Arifin
Research Institute for Food Crops Biotechnology, Bogor
INTRODUCTION
Spodoptera litura nuclear-polyhedrosis virus (SlNPV) (Borrelinavirus litura) is one of the insect pathogens infecting cutworm (Spodoptera litura) on soybean. This virus was first discovered in cutworm larvae in Central Lampung (Arifin and Waskito, 1986). Since 1985, experiments on the use of SlNPV to control cutworm were carried out at the now defunct, Bogor Research Institute for Food Crops.
Numerous experiments reported that SlNPV have high biotic potency (Arifin, 1993). As a biological agent, SlNPV is compatible with the integrated pest management (IPM) concept because: (a) its host-specificity only to the soybean cutworm and some other noctuids species, (b) it does not affect predators and parasitoids, and does not upset non-target host, human body, and environment, (c) it may alleviate insecticide resistant problem, and (d) it is compatible with most other control methods (Maddox, 1975; Starnes et al., 1993). There are several major reasons why SlNPV is suitable for a biological agent to control cutworm: (a) cutworms is a major pest attacking various kinds of vegetable and food crops, (b) considerable amount of broadspectrum, toxic, synthetic insecticides are used against cutworm, and (c) many cutworms are resistant to most major insecticides group. Efforts to develop SlNPV as a biological control agent can be conducted in three steps: (a) production of SlNPV, (b) solve the constraints affecting the effectiveness of SlNPV, and (c) optimizing application techniques of SlNPV.
The purpose of this paper is to provide information on biological properties, production, and application techniques of SlNPV as a guidance in the control of cutworm on soybean.
BIOLOGICAL PROPERTIES OF SlNPV
A. Description
SlNPV is a typical virus which produces irregular, crystal-like, proteinaceous polyhedra inclusion bodies (PIBs) in the nuclei of infected cells. The polyhedra which measured 0.5-15 µm, contain isometric virus particles (virions) with a surrounding envelope. The virions are rod-shaped, 40-70 nm X 250-400 nm, contain double-stranded, circular deoxy ribonucleic acid (DNA) molecules (Ignoffo and Couch, 1981; Tanada and Kaya, 1993). The morphological features of polyhedra inclusion bodies by light and electron microscopy is shown in diagrammatic representations as in Fig. 1. 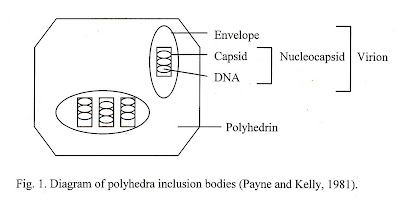 B. Mode of Action
SlNPV is normally transmitted from one insect to another by oral ingestion of polyhedra. When ingested by a larva, the polyhedra dissolved and release virions into midgut. Liberated virions passed from midgut to haemocoel and subsequently infected nuclei of susceptible cells, e.g., fat body, hypodermis, tracheal matrix, epithelial, and blood. Infected larvae appeared shiny, discolored and sometimes pink-white in color. Feeding is greatly reduced so larvae grow slowly. Larvae may gather at the top of plants and hang in a typical inverted position. Cell lysis and disintegration of larval tissue began shortly after polyhedra formation. Younger larvae died in 2 days, but older larvae died in 4 to 9 days after virus ingestion. Shortly after death, larvae become flaccid and integument ruptures, releasing billions of inclusion bodies (Ignoffo and Couch, 1981; Tanada and Kaya, 1993).
C. Pathogenicity
Bioassays were used to determine the pathogenicity of SlNPV. Several models of virus administering were tried, the easiest large-scale, analitycal method, however, was to incorporate polyhedra into a diet and feed it to neonatal or 24 h-old larvae. The concentration-mortality relationship for SlNPV is usually expressed as a median lethal concentration (LC50). This represents the concentration polyhedra that will cause death in half the test subjects. The LC50 for third instar larvae was 5.4 X 103 polyhedra inclusion bodies (PIBs)/ml and the LC90 was 4,7 X 105 PIBs/ml. Susceptibility of larvae decreased with age. First instar larvae was 100 times more susceptible to the virus than fifth instar larvae. Three days were required for initial mortality regardless of concentration (Arifin and Waskito, 1986).
D. Stability
Short-wave UV ray (215-260 nm) is the major environmental factor inactivating polyhedra (Ignoffo and Couch, 1981). Nearly 50% of the polyhedra applied on the upper surface of leaves was inactivated within 3 hours. Although these polyhedra was completely inactivated after 15 hours exposure to the sunlight, the polyhedra existed on the under surface of leaves still maintain 50% of its original infectio-capability after 20 hours. Application of polyhedra to the under surface of leaves was considered advantageous under direct sunlight condition.
There had been concerted efforts to minimize sunlight inactivation of polyhedra. Particulate sun-shields e.g., carbon, carbon-based dyes, alumunium oxide, titanium dioxide, clays, flour, and flourescent materials (poly flavonoids, whitening agents, and baits) were all increased the persistence of polyhedra. Ignoffo et al. (1977) suggested that sunlight inactivation of polyhedra probably is caused by peroxide or peroxide radicals produced by the UV irradiation of amino acids. Sunlight inactivation was inhibited but not completely stopped by addition of peroxidase.
Temperature likely to be encountered in the field are not so harmful to insect pathogens as does direct sunlight. Although field temperature (<450 C) had no effect on the stability of polyhedra, viral replication was inhibited at 400 C. Relative humidity plays a minor role in the persistence of polyhedra. Acids or alkalis disrupt polyhedra, thus, presumably destroy viral activity. Viral activity was not affected at pH 7.0, but was reduced slightly (<15%) at pH 4.0 and 9.0 and reduced significantly (>95%) at pH 1.2 and 12.4. Most insecticides were compatible with SlNPV. In a sensitive bioassay, only methyl parathion inactivated polyhedra. Formalin and sodium hypochlorite destroy viruses and thus are commonly used as disinfectants for SlNPV (Ignoffo and Couch, 1981).
The role of SlNPV as a mortality factor is greatly influenced by its ability to persist in a particular areas under natural conditions. Pathogens that do not persist must be applied repeatedly as microbial insecticides for temporary control of an insect pest (Maddox, 1975).
E. Efficacy
A preliminary test of unformulated SlNPV was conducted in 1992 to determine the effective dosages of polyhedra. Results indicated that polyhedra suspension of 1.5 X 1012 PIBs/ha was effective in the greenhouse (73% mortality), but not effective in the field (33% mortality). The data revealed that sunlight was probably the most destructive environmental factor affecting activity of SlNPV. To increase its effectiveness, SlNPV must be formulated into wettable powder concentrate (Arifin et al., 1993).
The next semi-field trials attempted to determine the effectiveness of SlNPV at different formulation materials was conducted in 1993. Results indicated that SlNPV formulated with lactosum when applied at a rate of 9 X 1012 PIBs/ha was effective against the cutworm. The mortality level of the larvae was 81%, initial mortality of the larvae occurred at 4 days after application, and larval mortality level of 80% occurred at 9 days after application. It was concluded that wettable powder using lactosum as inner carrier contributed to SlNPV efficacy (Arifin and Villayanti, 1994).
The effectiveness of SlNPV was compared with a standard insecticide (monocrotophos) and an untreated check in a field experiment in 1994. Results indicated that SlNPV at a rate of 1.5 X 1011 PIBs/ha (applied twice each at 7.5 x 1010 PIBs/ha with an interval of a week) gave better control than single application. At that rate, the cutworm population was reduced by 88%, whereas insecticide treatment was less 27% than untreated check. Leaf damaged level was less 22% than insecticide treatment and less 26% than untreated check. Soybean yield on SlNPV plots was higher 14% (161 kg/ha) than monocrotophos treated plots and 31% higher (301 kg/ha) than untreated check. The net benefit was more 25% than insecticide treatment and more 35% than untreated check (Arifin et al., 1995).
PRODUCTION OF SlNPV
Although several sophisticated procedures have been suggested, SlNPV can only be produced in cutworm larvae. Mass production of SlNPV began with production of a large quantity of selected isolate as inoculum. Production of SlNPV was conducted in four isolated facilities: (1) a diet-storage-preparation facility, (2) a facility with a unit for rearing stock culture of cutworm and another unit for mass rearing larvae for virus production, (3) a virus production facility, and (4) a product recovery and formulation facility. The production process of SlNPV is shown in diagrammatic representation in Fig. 2. 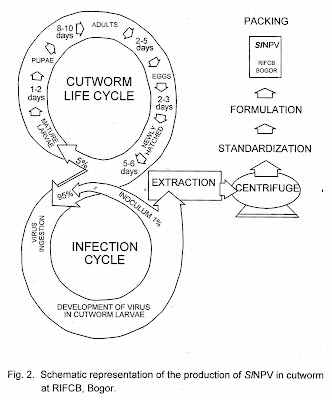